When it comes to winning millions of dollars when playing a slot game online, there is one game that has produced more millionaires than any other. Mega Moolah is a progressive slot game that has a base jackpot of $1 MILLION, and often rises up into the multi-million dollar range!

It is not a new game, Mega Moolah has been around for a few years now and it is still one of the most played games in any online casino, all because of the huge jackpot it has. The ability to create instant millionaires is a very alluring factor, which is why all the better online casino sites want to ensure that it is included on their virtual casino floors. 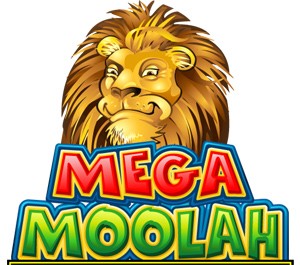 125 CHANCES to become an INSTANT MILLIONAIRE

150 CHANCES to become an INSTANT MILLIONAIRE

100 CHANCES to become an INSTANT MILLIONAIRE

80 CHANCES to become an INSTANT MILLIONAIRE

You ARE allowed to claim the bonus from ALL of the casinos.

In 2015, Jon Heywood became the Guinness World Record holder for winning the highest amount of money ever in an online slot machine!

There have been two Canadian instant millionaires created from them hitting the jackpot on the Mega Moolah slot game. The first one was a lady whose casino initials are I.R. She was playing Mega Moolah on her iPhone while round at her mother’s house, and she hit the Mega Moolah bonus round and decided to go for a quick toilet break while the bonus round played. 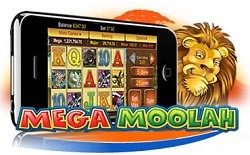 When she can back to her phone she was amazed to see she had won an incredible $3.3 million (USD). She won this playing at Golden Tiger Casino, and she has said that it has changed her life for the better right away, as she has now purchased a new house, and new SUV and has also donated some money to a local animal charity.

Then there was a gentleman who’s casino initials are G.M. that won a massive USD$3.9 million on Mega Moolah while playing at Quatro Casino. What makes this even more incredible was that he was actually playing Mega Moolah with a bonus that was given to him by the casino! This win has allowed G.M. to quit his job and start up a new business, so it was certainly a life changing moment for him as well. 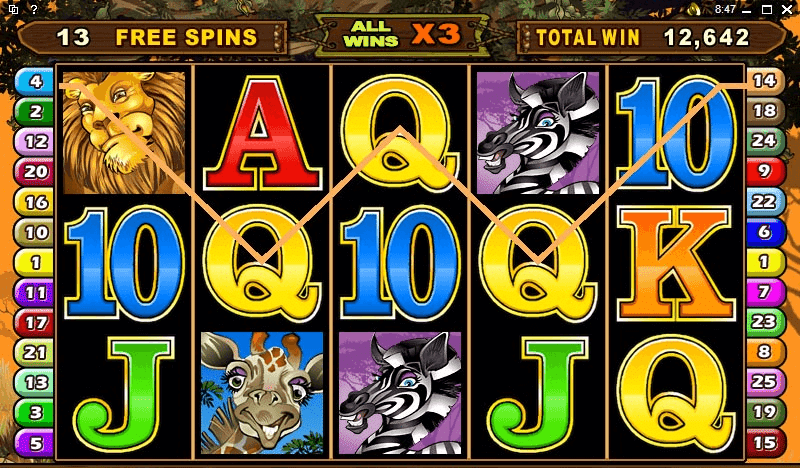 These are the base amounts for each jackpot, so they do not stay at these amounts for very long, as they increase the more the game is played. The game is linked across all online casinos that have it, so you can imagine that the jackpot builds up very quickly.

As well as the four different progressive jackpots inside Mega Moolah, the game also offers other features too. You can activate up to 15 Free Spins on Mega Moolah (as soon as you get three fortune teller monkey symbols anywhere on the reel) within the game, and you should also look out for the Lion symbols landing on your reels too in the Mega Moolah game, as these are wild cards that can pay out a lot of money (up to $15,000 if you get 5 of them). If you are lucky enough to land 3 or more scatters (Monkey) and get access to the 15 free spins, anything that you win will receive a 3x bonus during each one of the 15 spins in Mega Moolah. Do keep in mind that Mega Moolah is also available in an American theme, an Egyptian theme and even a dedicated Holiday theme, that is the beauty of Mega Moolah. The core concepts of Mega Moolah remain the same, but the feel, music, sound and symbols of Mega Moolah all change according to the theme you are playing. This ensures that players never get bored while playing Mega Moolah.

The Mega Moolah wheel itself has 20 pieces on it and each of those pieces are colour coded to signify the jackpot it represents. Before you start spinning the Mega Moolah wheel, bets can be adjusted between 0.01 – 0.05 coins with the + or – buttons that you will find at the bottom left corner of your screen. To just select the maximum bet possible right away, there’s a dedicated “Bet Max” button as well. Mega Moolah also has an auto play feature to save players the time and effort required to press the Spin button every time. Just go to “Expert,” select “Auto Play” and set the number of times you want the wheel to spin Mega Moolah automatically, without needing manual intervention from the player. So, the game of Mega Moolah is a lot of fun to play, and gives the player a lot of different incentives to keep them entertained as they play or even take a break while the wheel keeps spinning. 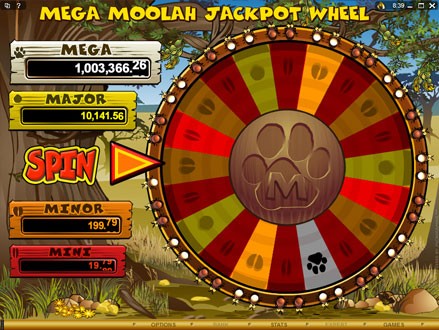 There have been many more instant millionaires created from playing the Mega Moolah slot game all around the globe over the last few years, and there will be many more created in the future too. Until there is a new Mega Moolah game that is produced that has a jackpot that can rival Mega Moolah’s for sheer size, then the game is likely to remain a firm favourite with players and online casinos such as Zodiac Casino for a long time to come.

Can I use free spins from my welcome offer to win real money on Mega Moolah?

Yes, you can use your free spins from any of our recommended BEST casinos to play and win on Mega Moolah!

How much can I win from a Mega Moolah jackpot?

There are four jackpots, and the largest jackpot starts at $1 million and increases until it is won and reset. The world record for an online casino jackpot was broken by Mega Moolah, reaching almost $21 million!

Can I play Mega Moolah on my mobile phone?

Yes, you can play on mobile, tablet, laptop or desktop, for your convenience.